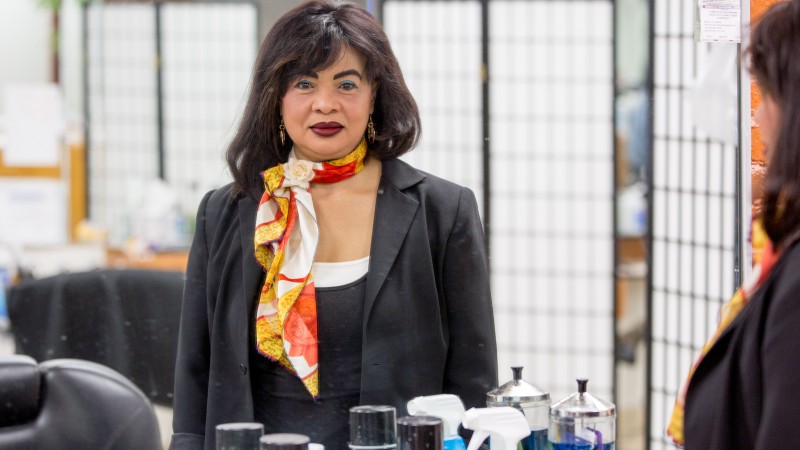 I'm thankful for my community in Boston for their support of my endeavors."

When Wildie Zama Ceccherini arrived in Boston from Haiti in 1989, she initially stayed with her sister. The day after her arrival Wildie went for a walk in their neighborhood and was astonished to see a sign for the Boston Symphony Orchestra.

“I love classical music and theater,” says Ceccherini. “I listened to the Boston Symphony as a kid, that's why I wanted to come here. I couldn’t believe it when I saw that sign.”

As it turned out, Wildie's sister lived behind Symphony Hall. Wildie entered the legendary concert venue and struck up a conversation with a staff member, who told her how to reserve a ticket but also told her about free lunchtime concerts at the New England Conservatory.

So began Wildie's love affair with her adopted city.

Ceccherini's path to Boston began in the Haitian countryside. She left L'Asile, a farming community in southern Haiti, at age 16 to attend high school, and eventually university, in Port-Au-Prince, the Haitian capital, before coming to Boston.

“Even though I was an immigrant I knew I would make it here,” she says. “The United States has so many opportunities for people. There’s a path, and I decided to have my own business.”

She established Boston Hair Design in 1983 and two decades later moved to her present shop on Kingston Street. Wildie has three employees, and the shop serves men and women, many from area businesses, but also from the district’s medical center, universities, and beyond.

A family of businesswomen

“Because I grew up around strong independent female figures I never doubted my ability to accomplish my dream,” says Ceccherini, whose mother, a seamstress, always ran her own business. “I always believed that I could do whatever I set my mind to, and that is what pushed me to persevere despite the obstacles.”

“Being a woman and a business owner, I’m a role model for the younger generation in Haiti,” says Wildie.

Wildie is a people person, so her professional choice is a perfect fit. She’s been seeing some of her Boston Hair Design clients every three or four weeks for decades.

Even after they retire, many of her clients come back downtown to get their hair cut at Boston Hair Design.

“They want to see you after a while, like a family,” she says.

Wildie has been involved with the Downtown Boston Business Improvement District since its earliest days. She met with BID President and CEO Rosemarie Sansone during the campaign phase leading up to the organization’s incorporation in fall 2010.

“I heard the plans and thought it was the best idea ever,” says Wildie. “From then on it’s been one of the best things that ever happened to the city.”

She loves the BID’s emphasis on cleanliness.

“Those ambassadors work twenty-four-seven. They also give people guidance.”

And Wildie appreciates that the BID is a reliable source of information about everything going on downtown.

“The BID is great with communication and keeps the community up to date,” she says. “I’ve been in the city for thirty years. Years ago you’d hope the newspapers would have information. Now the BID lets you know what’s going on.”

While Wildie proclaims her love for Boston eagerly and often, she also her abundant garden offers a connection to the rural life of her childhood

“I plant herbs, corn, eggplant, and I love cooking for my family and friends,” she says.

The seven Zama sisters now live in the United States and Canada, they return to Haiti frequently and support education there.

In 2012 Wildie founded Haiti Global Youth Partnership, Inc., a nonprofit organization that works with schools and the general community in her hometown.

“We work to promote education and socioeconomic development in L'Asile and provide resources and programs to benefit the community. My clients are a big part of the organization's support system, and I'm thankful for my community in Boston for their support of my endeavors.”