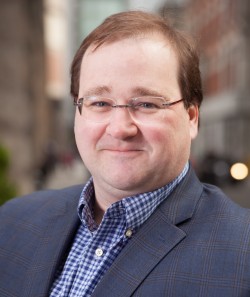 George Comeau joined the Downtown Boston BID in June of 2016. George is responsible for the BID's brand visibility and awareness, and promoting the BID's assets to continue to enhance the district as a premier destination for working, living, playing and visiting. He develops and executes all marketing initiatives to communicate the vision, strategy and brand placement of the BID. He was previously the Associate Chief Communications Officer at Suffolk University, is a freelance producer, an attorney and a writer. George serves as a Commissioner of Public Libraries at the Massachusetts' Commission of Public Libraries, is currently a Trustee of the Canton Public Library, vice chairman of the town of Canton's Community Preservation Committee, Canton's Historical Commissioner, and the Curator of the Canton Historical Society. George is an active preservationist and is restoring a first-period home as well as working to develop the Paul Revere Heritage Site in Canton, Massachusetts. George received a BS in Communications, MPA in Public Administration and a Juris Doctorate, all from Suffolk University.