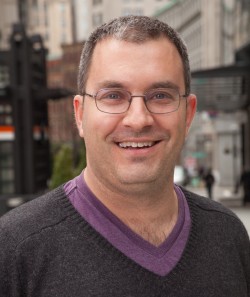 Doug Meyer has been with the Downtown Boston BID since its inception, having worked at its predecessor organization, the Downtown Crossing Partnership (DCP), during the 2009-2010 campaign to create the BID. He started working at the DCP in November of 2009. Doug is the Membership Services & Database Manager for the BID, and his position entails recording, tracking and managing BID members' feedback. He also compiles and tracks statistics regarding BID members and large-scale trends and patterns in the district. His role also includes managing a variety of corporate archives and databases.

Before working at the DCP and BID, Doug was a Book Review Editor at the New England Quarterly history journal (2007-2009), Development Editor at the Baseline Development Group (2004-2007), and an Editorial Assistant at the Las Vegas Advisor (2001-2003). Doug has a bachelor's in history from Pomona College in Claremont, CA, and a Master's in Public History from Northeastern University. He is also a fifth-generation Bostonian and has deep connections to Downtown Boston through his father, who was born on the Downtown Boston Waterfront on T Wharf (since demolished) in 1946 and who has worked in Post Office Square for nearly 40 years.